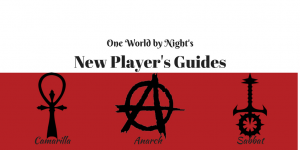 This week the Marketing Team worked very hard to get three packets together.  We are proud to announce our New Player Packets for three Vampire Genres.  Each packet is now available on the One World by Night Page, 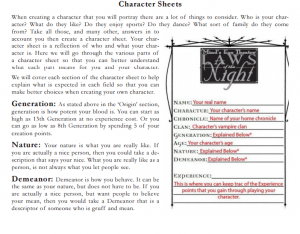 due to the nature of the information provided we do have them behind a password like most other packets.  You can ask your STs, CMs, or Coords for a copy and I’m sure they would be happy to help!

Each packet contains enough information to give you an understanding of the World of Darkness and a feel for the Genre of the Sect.  There is additional information on One World by Night, and character creation.

All packets open with information about One World by Night, and then go in to the basics of Vampire Genre in the World of Darkness.  Covering information like how Vampires are created, the meaning behind Generation, and dispels some of the various myths surrounding Vampires.  Out-of-Character vs In-Character is explained, and how to show others if you are OOC. 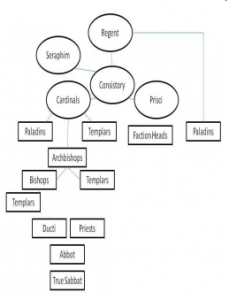 The Sabbat New Player’s Guide was written by Holly Race, with some consultation by Adam Sartori.  The packet was formatted by Marion Birdsell.  Inside you will find information about the Sabbat, the Code of Milan, Clans and Factions.  Including a visual chart to assist in understanding the complex hierarchy of Sabbat Political positions.

The Anarch New Players Guide was compiled and written by Marion Birdsell, she also handled the formatting.  Contributors:  Nate Brown. Steven Hill, Janet James, Bruce Linsay, Maks Stone.  The Anarch Genre has grown by leaps and bounds in One World by Night over the last decade.  With little reference material this packet is more inclusive than the others.  The roots to the movement are generally added as a footnote to the Camarilla.  This packet explains the origins of the movement, and brings you up to the modern nights.  Enough information to guide you in to the genre without overwhelming.

The Camarilla New Player’s Guide was written by Holly Race with contributions from Danielle Frink.  Formatting was done by Marion Birdsell. 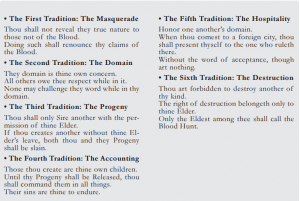 The original Vampire Genre by White Wolf and played in One World by Night.  After 21 years of story and game play the genre has evolved quite a bit.  We have added to and removed from over time.  Camarilla politics can be a tricky, the information provided in this packet give a basic over view of the hierarchy, explains status and boons.  We have also included information on the new Social Orders that were added in our most recent genre packet update.